Plot: A woman discovers the existence of MIB and then is tasked with saving the world in her very first mission 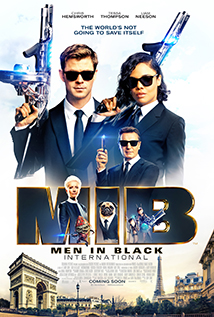 It's hard to believe, but the first MIB film came out 22 years ago. And it is still a classic. I watch it every chance I get. I was really hoping this new installment in the franchise would have me just as excited. And it almost did.

While it may not live up to the popularity of its predecessor, it is still a very good film and one that is perfect for getting out of the Summer heat and enjoying a large bucket of popcorn.

Chris Hemsworth is at his Hemsworthian best. (I think they pay him based on the number of half-wink, half-smile faces he makes). He has great banter and chemistry with a lot of the characters including the character played by Tessa Thompson. But we already knew that they were great together on screen because of THOR: RAGNAROK and AVENGERS: ENDGAME.

The only thing I didn't like about this film is that I figured out the big twist really early on in the movie. I was hoping I would be wrong, but it ended up being exactly what I thought it was. Aside from that small annoyance, everything else was a lot of fun. The film is filled with fun throwbacks to the original, but it also gives Hemsworth and Thompson room to make this new MIB film their own.

If you are looking for a great Summer flick, you should give this one a chance. You might even want to take the older kids with you, once you've seen it and made sure it isn't too much for them.