Posted by Clint on Wednesday, 03 July 2019 in Movie Reviews

Plot: A couple travels to Sweden for a mid-summer festival, but the festivities are much darker than they could have ever imagined 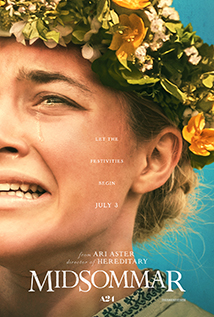 Two and a half hours. 150 minutes. 10% of an entire day. That is how long this insane horror flick is. Another way to put it is about 60 minutes longer than any horror film should ever be. That isn't to say that this is a bad movie. In some respects it is a masterpiece. But for the average movie-goer, this is a psychotic, weird, waste of time.

This film uses light as it's main theme. And just like THE SHINING, this movie is filled with horrific things that you get to see in all of their hellish glory because the lights are always on. Some of the images would be much better off being in the shadows, but there is no such luck for us or the trapped stars of the film.

This is a true horror film, meaning that is isn't necessarily a scary movie, but it is filled with horrifying images and moments. From the first minute where the film starts to take a dark turn it never lets you rest until the lights turn on in the theater. The creepiness factor continues to rise throughout the film until it climaxes in a moment of true terror.

This is not a movie for everyone. In fact, it is a movie for very few people. Basically, the only people that are going to "enjoy" (and I put that word in quotes on purpose, because nobody is really going to enjoy this film), are high brow, high art film lovers, and those that really like strange and grotesque horror films over the typical slasher films we see all the time. If you don't fall into one of those two categories, go ahead and skip this movie. You'll just be annoyed later on when you hate it and you are trying to get your money back after walking out a hour into it.

As I walked out of the theater I was thinking, "that was a wild movie that I never want to see again." Then I heard a woman talking with her friends and she said, "If anyone is thinking about seeing that movie, they shouldn't. That was awful." I have a feeling there are going to be a lot of conversations just like that all weekend long.