Posted by Clint on Thursday, 16 August 2018 in Movie Reviews

Plot: An undercover, elite, tactical force must deliver a man to a safe zone, but there are many powerful people that want him dead 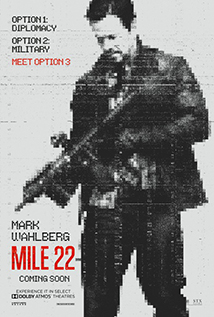 Peter Berg and Mark Wahlberg have teamed up for some very interesting and good action movies. This film is by far the worst of that bunch.

The opening scene should be one that is full of suspense and precise action. Instead it falls flat to the point of almost being boring. Even when the action starts the excitement level never really gets going.

Once into the meat of the movie it becomes quickly apparent that there are very few characters, if any, to root for. Everyone is a jerk, or evil, or an evil jerk. Throw on top of that some incredibly bad dialogue, jokes that don't hit, and confusing fight scenes where you can't tell who is who, and you have a movie that is almost a complete waste of time.

It's pretty shocking that an actor/director team of this caliber made a 95 minute action flick that feels boring and slow, but somehow they managed to do it. If this isn't made by Berg and Wahlberg my guess is that it would have gone straight to digital release.