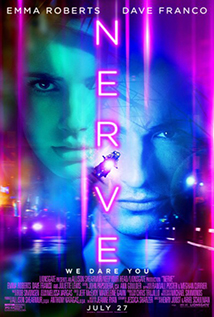 Ladies and gentlemen, Hollywood had an original idea! Not only that, but they didn't mess it up while making this movie. NERVE is actually a very well done, unique, imaginative, and intriguing film.

Dave Franco and Emma Roberts have great chemistry, and the plot is one that will keep you engaged throughout the entire film. I heard a lot of people saying, "that is something that could actually happen right now in real life." It's true, and that is what makes this film so compelling.

The directors did a great job of integrating the online aspect of the plot into the movie in a seamless and creative way. At times you feel like you are one of the watchers.

I highly recommend NERVE. It is a fun, intense film with great twists that you won't see coming.