NORM OF THE NORTH - Review

Posted by Clint on Friday, 22 January 2016 in Movie Reviews

NORM OF THE NORTH

Plot: A polar bear comes to New York City to try to save his home in the arctic from being developed by humans 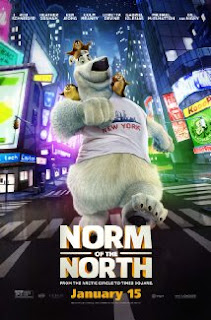 It used to be when Hollywood wanted to make some sort of movie with a political bent they would at least try to hide it behind a decent plot. NORM OF THE NORTH doesn't even bother with things like good plot, or compelling story telling. It just jumps right in with how bad humans are blah, blah, blah.

I saw this in an almost empty theater, but there were two families in there with children that looked to be around 8 - 10 years old. The theater was dead silent for the entire one hour and 26 minutes with one exception where one kid laughed at a potty joke. When you can't make your target audience laugh because even your slapstick humor attempts are lame, you know you have a colossal bomb on your hands.

This is a terrible movie and a complete waste of time. Save your money for one of the many animated films coming out over the next few months. I'm sure they will all be better than this one.