Plot: A family moves to rural Maine for a slower life, but they soon find out there is evil lurking on their land 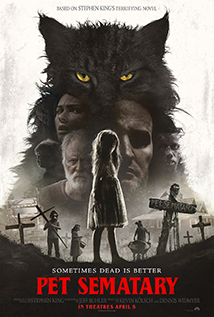 When it comes to the Horror genre there is no greater name than Stephen King. That said, several of his movie adaptations have been pretty bad. Then last year we got the gift of an extraordinary film in IT. I was hoping this movie would be just as good.

It isn't...but it is still a decent flick.

John Lithgow does a great job of carrying the secrets of the movie with him. But the young girl, Jete Laurence, steals the show. She is sweet, charming, terrifying, and horrible. Without her acting abilities the film wouldn't have been nearly as good as it is.

The movie is extremely creepy. It isn't overly scary, but you'll feel the chills while you are watching it. In fact, there are very few scares in the main storyline. They had to use a secondary plotline, that has nothing to do with advancing the main story, just to give us enough scares so we would think we got our money's worth. At least they didn't resort to lame jump scare tactics.

This is not a movie for Horror novices. There is a lot of gore and other creepy factors that will turn stomachs and heads. If you like Horror flicks, you should give this one a shot. If nothing else you'll be creeped out for a good hour.