Plot: A young man connects with a Pokemon and both work together to solve the mystery of his missing father 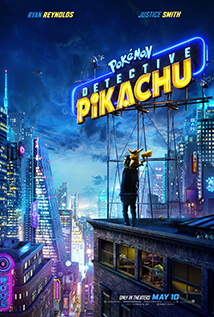 Over the many years that I have been a professional film critic I have seen some truly nerdtastic crowds. The level of nerddom for this film absolutely destroys the nerdiness of all other films. It leaves a trail of taped up broken glasses, geek speak, and dorky laughs in its wake. I have never seen a group of 20-something guys in awkward attire so excited for a little, fuzzy, yellow, teddy bear.

As a complete non-participant in the Pokemon craze, I was thoroughly at a loss for most of the movie. I got the general plot enough to understand the quest, but there were people laughing all around me at things that I still don't understand why they were funny. There were also several oohs and ahhs that went over my head.

Thankfully, I made sure to see this movie with a couple of serious Pokemon fans. One of them a young girl, and the other a 21 year old guy. The bottom line: Both of them loved it.

Critically speaking, this movie felt slow and a bit too simple, the acting isn't great, and the special effects looked dated, but I don't think these are issues that will deter the true Pokemon fans.

If you are a Pokemon fan, this is a must-see movie. If you aren't a fan then go ahead and skip this film. There is nothing in it for you.