Plot: A group of women at a retirement home start a competition cheerleading squad 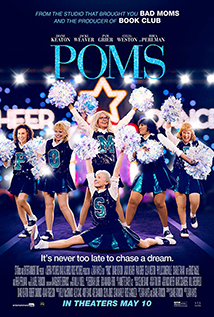 Just like a group of octogenarian cheerleaders, it's very difficult to expect too much out of a movie like POMS. The good news is that the film over delivers on the fun and the funny.

This group of sassy grannies will have you laughing until parts of you that normally don't hurt start hurting. There are several laugh out loud moments, most of which are delivered between the stars and their High School rivals.

The movie is just sweet enough. Only occasionally does it feel like it drops into the land of forced sweetness. And thankfully, those scenes are short.

Critically speaking, this film leaves a lot to be desired in the areas of acting, using cliched tropes, and continuity. There is one chase scene where they literally use the same shot 15 seconds apart. And the whole film fits perfectly into the 90-minute comedy formula.

Aside from those small negatives, this is a fun film that will be a great night out for you and your girlfriends. It might even surprise a few people by doing very well at the box office for several weeks. It's not a great film, but it is one worth seeing.