Posted by Clint on Wednesday, 23 December 2020 in Movie Reviews 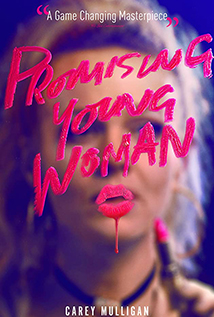 Simply put, this is one of the best movies of the year. Carey Mulligan, who is typically amazing in everything she is in, gives the best performance of her career to this point. She plays a woman set on revenge, but she doesn't just charge ahead without thinking. No, she is playing chess while everyone else is playing checkers.

She also shows the complexity of her acting skills by playing a very smart, but damaged person who has the ability to make herself become the object of desire for any man. She goes from drunk to sober in a snap, from feigning ignorance to the smartest person in the room in one sentence, and from prey to predator before the guy has any clue what is happening to him.
Mulligan's acting is paired well with a fantastic script, a solid cast, and great directing from Emerald Fennell. The story moves along well, and it is filled with mystery, suspense and drama.
This film will be in the mix for several of the big awards this year, especially Mulligan for Best Actress. It is one that you should watch right away and then probably see again just because you'll want to catch all of the things you missed the first time.