Posted by Clint on Monday, 02 December 2019 in Movie Reviews

Plot: A couple, finishing up their first date, end up on the run after a bad run-in with a cop 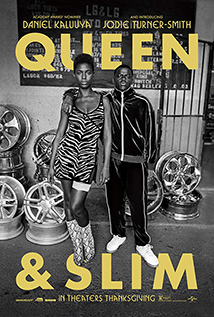 When making a movie based on fictitious people living in the real world there is only one way to make it work right. The characters have to think and act like real people. The have to do the things that almost anyone would do in the same circumstance. If they do something different, it rings an alarm bell in our minds and comes across as fake or forced.

I say all of that to say that either the screenwriter had no clue how to write real characters, or we have to believe that these are two of the dumbest people to ever walk the face of the earth.

This could have been a spectacular film. It has all of the pieces to make something special and powerful. Instead, it completely falls apart to the point where it almost becomes a parody of a "chase" movie.

The film starts out in a good enough way. We see the couple on their very awkward first date, and then, if you've seen the trailer you know I'm not giving anything away, they end up killing a dirty cop in self defense. At this point the clock starts ticking on their lives and freedom. Now, if you or I were in a horrific situation like this what would we do? We would make a plan, grab all of the cash we could, and get to our destination as quickly as possible.

No, they argue over the dead cop, they stop, get out of the car and argue some more, then they go on this meandering road trip where they stop more to do stupid stuff than a family road trip with six kids and three puppies! It was killing me as I watched it because they did a good job of building up the suspense of the manhunt, but then they would kill it by stopping to see the sights.

As for the acting, Daniel Kaluuya does a great job. Jodie Turner-Smith, not so much. She delivers so many lines in stilted, non-emotional ways, it almost makes me think that she was reading them off of cue cards instead of actually paying attention to and feeling the words and meaning of what she was saying. It baffles me that there are some people talking her up for best actress awards. Obviously, they saw a completely different movie than I did.

I would love to see someone do a remake of this movie the right way. Because, when they do, it will be amazing.