Plot: The son of Shaft needs the help of his estranged father when his best friend gets into trouble 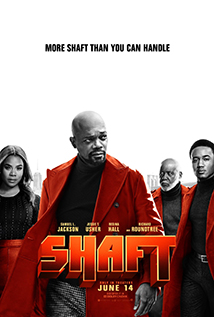 If you are old enough to remember the Richard Roundtree SHAFT films from the 70's then you will be happy to know that this movie does a good job of paying homage to them, while still making itself relevant to 2019.

I was surprised by the humor throughout. I figured there would be a couple of laughs thrown in to lighten the mood, but this movie is really funny. In fact, there were more jokes in this movie than in some of the comedies that have come out recently.

The only thing I didn't like was that the mystery and the solving of the mystery were too straightforward and formulaic. I was hoping for more twists and turns, but instead it's a no-nonsense who-done-it.

This film does a fantastic job of using the music to it's advantage. There is one scene where the main action gets interrupted, at that point the music stops dead, the characters deal with the nuisance, and then, as they get back to the point of the scene, the music ramps up again like it's being played on a record player.

Overall, this is a fun, funny film with a decent mystery and a little bit of suspense. If you are a fan of Samuel L. Jackson then you have to see this movie. The same goes if you are a fan of the original SHAFT flicks. It's a good summer film where you can relax, be entertained, and not have to use your brain too much for a couple of hours.