Posted by Clint on Monday, 23 December 2019 in Movie Reviews

Plot: The world's greatest spy is accidentally turned into a pigeon, but that doesn't mean he can give up on the case 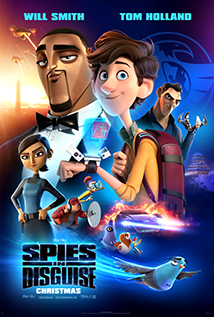 I was a little wary of this film when I first saw the trailer. A guy turns into a pigeon, and that's supposed to make for a good movie?

This one is a ton of fun for kids and adults. It is filled with all sorts of physical humor and potty humor that will keep your child laughing through the end credits. It is exciting, fast-paced, and filled with lots of spy gadgets.

The animation isn't the latest and greatest, but it is just fine.

Some parents may want to check this movie out before you let the little ones see it. It is a spy movie, so there are several fight scenes. There isn't anything overly violent, but you may decide that it is too much for your family.

While this isn't on the same level as a movie like FROZEN II, it is still a fun film. And one that could be a great escape for a couple of hours while the kids are on Winter break.

Tagged in: 2019 Animated Spies In Disguise Tom Holland Will Smith