Posted by Clint on Friday, 20 December 2019 in Movie Reviews

STAR WARS: THE RISE OF SKYWALKER

Plot: Rey and her friends must find the hidden base of the First Order and destroy them before they take over the universe 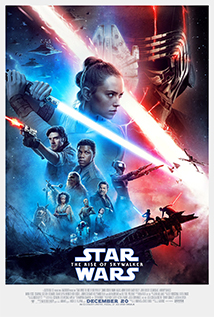 I saw this movie like a fan. Not like a movie critic. I bought my ticket the day they went on sale, I stood in line for nearly two hours so I could get a good seat, I endured the commercials and trailers leading up to the main event, and then I cheered right along with everyone else at all of the right moments.

It's been 42 years since the first STAR WARS film hit theaters. And as far as I'm concerned, we got a fantastic ending to an epic franchise. There are many critics hating this film, but I say this movie isn't for them, it's for the fans. I was in a theater packed to capacity, literally not one empty chair, and I heard ZERO negative reaction from the audience during or after the movie. Everyone LOVED it.

As for the film, it is another exciting STAR WARS story with several new characters, all of our favorites, and a few surprises along the way. Each character has their part to play and they do it well.

The story is exciting, full of action, suspense, and touching moments. There are tons of Easter eggs for fans of the series, and many moments that will have you cheering out loud.

If you are a fan of episodes 7 and 8, you'll be very pleased with this one. It answers a lot of questions, and ties up almost all of the loose ends. (There is one thing that didn't get resolved, and that is driving me crazy, but that's for a discussion after you've seen the movie).

I've been a fan of STAR WARS nearly all of my life. As a fan, I couldn't have asked for a better finale. I will be seeing this again as soon as possible. If you are a fan, I think you will, too.