Posted by Clint on Friday, 11 October 2019 in Movie Reviews

Plot: The Addams family have lived in solitude for years, but now they must deal with perky new neighbors 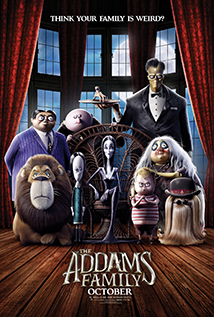 Get ready to snap twice for one of the best animated movies of the year. THE ADDAMS FAMILY is fantastic.

I took my 9 and 7 year old daughters and they both loved it. (Especially the 7 year old. Her favorite part was the song...which she now sings incessantly). The audience was filled with kids and their parents, and nobody seemed unhappy at the end. During the film there was a ton of laughter and excitement filling the room.

The story itself is pretty basic and formulaic, but it is a movie made for kids, so that isn't too much of a bad thing. The good news is that it is filled with funny dialogue, amazing physical comedy, and off-the-wall weirdness that makes the Addams family so special.

One thing that makes this movie go great is that there are many moments that are very dark and twisted if you are an adult, but they go right over the heads of the kids so they aren't too creeped out or scared. I was talking with another adult after the movie about how wonderfully demented the whole thing was for adults, and yet still an age-appropriate movie for young kids. This is the kind of film that is great for all ages.

If you are looking to give your little goblins a little bit of a scare this Halloween season, this film is perfect. The whole family will enjoy it. (And you'll also have a fun, new song to sing and snap to.)