Posted by Clint on Thursday, 01 July 2021 in Movie Reviews 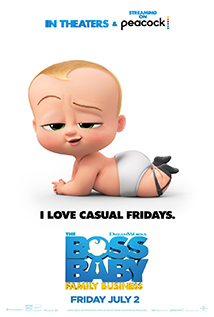 Most animated kids movies have some quaint little takeaway that hits home at the end of the film. Something like, "family and love are more important than anything else." Then sometimes those films are successful enough to get the green light on a sequel. And then a few of those sequels take that tidy little takeaway from the first film and spend the entire 90 minutes trying to hammer it into your brain like a railroad spike.

This film is that hammer.

I really wish this would have been a better film. The first one was great, and this one has moments of greatness, but overall it is okay at best. There is nothing noteworthy, unique, or worthy of making the trek to see this in the theaters. Especially since there are plenty of family films available right now that are so much better than this one.

It does have a few good laughs and a couple of really fun action scenes, and there are a couple of throwbacks that fans of the first film will enjoy, so if you do end up seeing it, you won't be completely disappointed.

If you can stream it on Peacock, it might be worth it if the price is low enough, but I wouldn't pay any more than about $10 for this one.
Tagged in: 2021 Alec Baldwin Animated James Marsden The Boss Baby: Family Business