THE CALL OF THE WILD - Review

Posted by Clint on Friday, 21 February 2020 in Movie Reviews

THE CALL OF THE WILD

Plot: A dog in unfamiliar surroundings, and a man in the same situation, find each other and learn from one another 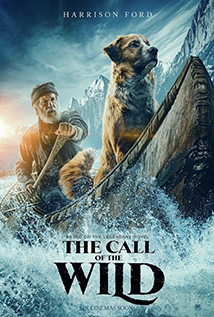 There is a saying in Hollywood, "never do a movie with kids or animals." Well, the good news for Harrison Ford is that he didn't have to work with any animals in this one. I know that sounds impossible, but it is true. The dog in this movie is 100% CGI. As far as I could tell, there wasn't a single real animal in this entire movie.

I know this because the computer animations were so bad that it kept pulling me out of the story. All of the dogs moved in odd ways, or too fast, or just looked off in some way. There were several scenes that could have easily been shot with a real dog, but for some reason they chose not to do that. Instead we end up getting nearly two full hours of Harrison Ford looking in the general direction of where a dog should be.

As for the story, it is okay. It's a PG movie, so it is mostly safe for the entire family, but that also means the conflict is muted, making it a fairly bland film. The bad guy is almost cartoonish in the way he acts. I kept on waiting for him to break out into a Yosemite Sam skit.

There are a couple of elements that may be a bit too much for the under 8 crowd. If you are thinking about taking the younger kids, you may want to check it out beforehand to make sure it is something you want them to see. However, I recommend not wasting your money to see this one in the theaters. It's just not good enough to deserve your hard earned money.

They need to take this movie back and do a couple more months of CGI work on it before releasing it. And while they are at it they should probably change the saying to, "never do a movie with kids, animals, or adults in motion capture suits pretending to be animals."

Tagged in: 2020 Adventure Harrison Ford The Call Of The Wild