THE CURSE OF LA LLORONA - Review

THE CURSE OF LA LLORONA

Plot: Several families are terrorized by an evil ghost that craves children 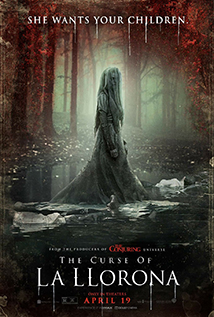 The trailers for this film looked terrifying, and when I found out it was tangentially related to the CONJURING world ,and done by the same people, I was eagerly anticipating it.

Then I saw it.

Does it have a few scares and jumps and bumps? Yes. Will it terrify you to the point that you don't want to sleep alone? Not even close.

The scariest thing about this movie may be the clothes, because the whole thing is set in 1973. And we all know how horrifying 70's fashion was.

The film is only 90 minutes long, but because it is filled with tired cliches, drawn out scenes trying to build tension, and creepy people in creepy churches telling ghost stories that go on forever, it feels like this movie is more like 2 1/2 hours long.

Once you throw on top of that all of the insanely stupid things the characters do that nobody in real life would do, you end up with a pretty lame movie.

One good thing though is that the kid actors are great. The exorcist...not so much. He sounds like a Spanish-speaking Keanu Reeves.  It is very odd to watch.

This flick will give you a couple of good scares, but that's about it. The other 87 minutes are pretty much a waste of your time and money.