Plot: Students try to bring back a play in which a student died while performing several years earlier, but an evil presence has other ideas. 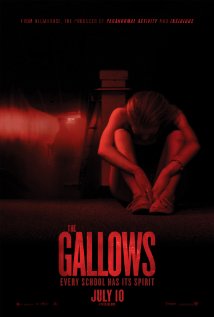 Shockingly, I was pleasantly surprised by this horror flick. It is by no means a great film, but the story is fairly interesting, and the twist is one you will never see coming.

The downside is that this is another "found footage" film, and with this one they barely even attempt to give a reason for why they are carrying cameras around the whole time. And if you think for more than three seconds about the reason why they are having to use the cameras, you will realize it is a plot hole the size of Texas.

THE GALLOWS isn't an overly scary film, but the scares that are there are almost all legitimate, (with one hilarious exception). That said, this film will make for a fun date night full of suspense and chills.