Plot: A con-man thinks he's found an easy mark worth millions, but there is more to her than he knows 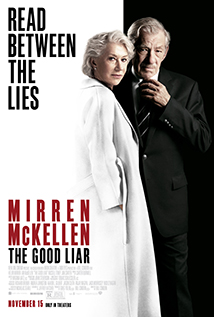 Helen Mirren and Ian McKellen are two of the best actors to ever grace the big screen. To see them together is a treat. Their acting is superb, the plot is intriguing, and the secondary characters add in just the right amount of spice to liven everything up. Unfortunately, the screenplay is lacking.

It would be amazing to see this cast do a similar film with better writing. It is obvious that they did the absolute best that they could with what they had to go with, but that wasn't enough to turn this into a great film.

Perhaps the greatest sin is in the reveal. When we finally get to figure out what is really happening it's all done in one, quick dialogue dump. As it was happening I wanted to yell at the characters to leave us more to figure out. Instead, we ended up being force-fed the entire plot twist then hurriedly pushed to the finish.

Another element that takes away from this film is that it may have fallen victim to the trailer giving too much away. It might have been better had we not known Mirren's character was setting him up from the beginning. It's a long slog for the first hour or so waiting on what we already know to be true.

I will say that I do recommend this movie for people interested in watching fantastic actors doing their craft very well. As for the movie itself, I would recommend waiting for the digital release. You won't miss anything.