Posted by Clint on Friday, 03 January 2020 in Movie Reviews

Plot: A detective tries to solve a brutal mystery only to find out super-natural forces are plotting against her 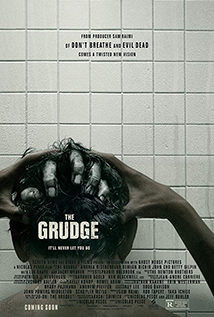 We aren't even a full week into the new year, yet we already have a solid contender for a top 10 worst film of 2020.

I don't remember the last time I was this bored while watching a horror flick. Sure, I've seen a ton of them that were really bad, but most of them have at least some entertainment value. This one is slow, barely suspenseful, and convoluted.

Perhaps the most telling sign that this movie is terrible is that it is only 93 minutes long, but it could have easily had a good 30 minutes taken out of it. The other bad sign is that this movie has been in the works for almost six years. It was written, rewritten, finally filmed in 2018, an then sat on a shelf until it's release now.

Even the jump scares in this movie are useless. Yes, you might have a quick moment or two of fright while watching this, but those fleeting moments won't make up for the majority of the time you'll sit there completely bored.

There are a lot of amazing, award-worthy films still in the theaters right now. Spend your money to see one of those. Don't waste your time on this junk.