Posted by Clint on Friday, 13 March 2020 in Movie Reviews

Plot: A group of rich liberals kidnap and hunt conservatives for sport 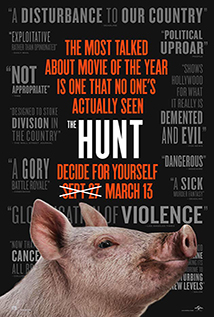 If you are the kind of person that goes to movies for the gratuitous violence and prefer your plots to be paper thin, this movie is your Magnum Opus. Literally, there is no plot to this movie for at least the first 45 minutes and maybe even longer. All that happens in the first half is violent, bloody death after gory death.

When we finally do get some sort of semblance of a plot it feels like the entire idea and script were thought up and written out over a three-beer lunch between two college buddies. It's basically death, death, death, oh, here's a really flimsy reason why, death, death, big fight scene, death, the end.

I'm sure that on some level this is supposed to be a really smart, satire regarding our current political environment, but the reality is that it completely misses in both being smart and a satire. It is nothing more that a bloody romp through a forest.

On a base level this is fun and sometimes funny, but overall it's just too pointless and dumb to be worth a recommendation.