Posted by Clint on Friday, 28 February 2020 in Movie Reviews

Plot: A woman tries to convince everyone that her abusive, ex-boyfriend is invisible and attacking her 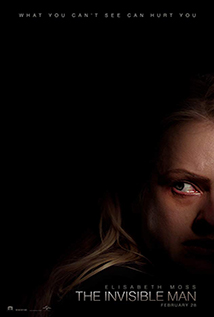 They can have that argument all day long. What I know to be true is that this is the first of the four monster movies, (THE WOLFMAN, DRACULA UNTOLD, THE MUMMY, and THE INVISIBLE MAN), that is actually good.

This film is filled with high suspense, a compelling story, great acting, and good pacing. The first 10 minutes will have you on the edge of your seat and having to remind yourself to breathe. And the suspense builds from there.

Another fascinating aspect of this film is the use of camera movement to build suspense even when there is nothing on the screen except the set. It feels like you are following the invisible man, or waiting for him to appear at any moment. Also, kudos to the actors that had to do fight scenes with nobody. It is very difficult to flail around by yourself and not have it look completely ridiculous, but they managed to pull it off very well.

If you like suspense and a few good jump scares, you need to see this movie right away. This has the potential to be one of the best horror films of the year.

It's scary and smart. Very few horror films can claim both of those things. This one can.