Plot: Three women plot to take over the mob business in Hell's Kitchen after their husbands are sent to prison 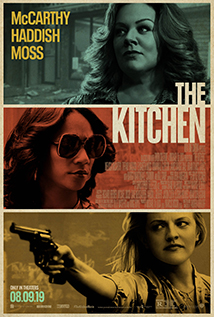 Sometimes an idea looks great on paper, but when it finally plays out it isn't very good. That is the case with THE KITCHEN. What should be an entertaining, female-empowering, 1970's mobster film turns out to be a slow, half-told story where, ultimately, it is men that are really the ones in power.

The good news is that the acting is very good and the music is great (especially if you are a fan of Fleetwood Mac). Aside from that this movie has very little to offer that would make your ticket purchase worth it.

Unfortunately, the best parts of this movie are pushed off to the side, and the twists that could be fascinating are played out way to fast and too matter-of-fact. When the reveals come, it isn't an a-ha moment, but rather a moment where you just shrug your shoulders and move on to the next scene.

Thankfully, this film is less than two hours long, but the first hour drags on forever. By the time the real action starts to kick in we already know almost everything about the story, so it's just a matter of watching it all play out instead of feeling like we are experiencing things with the characters.

It is truly disappointing that a film that could have been filled with kick-butt women doing kick-butt things ends up being a story about the women only being able to handle things with the help of men, and eventually ending up in a situation where they only have power because the men are letting them. If you are going simply for the female power angle, then go ahead and take this one off your list now, otherwise you will be severely disappointed.