Posted by Clint on Sunday, 21 October 2018 in Movie Reviews

Plot: Thanksgiving with the family becomes a political debate after a controversial decision is made by the Government 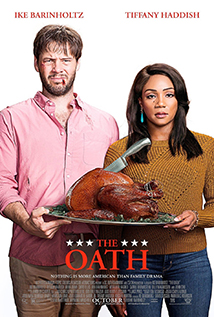 Why on earth would anyone want to watch a bunch of people yell at each other about politics for nearly two hours? If that is your jam, then by all means enjoy sitting in the theater all alone for this heap of trash.

I was especially disappointed because Ike Barinholtz and Tiffany Haddish are two of the best comedic actors in Hollywood right now. Unfortunately, Ike wrote and directed this like he was really trying to win a political debate with his brother rather than making something that could at least be mistaken for comedy. Tiffany Haddish completely mails it in with her role. It feels like she knew she was in the middle of a terrible situation, but was obligated to finish as a favor for her friend.

There were so many pacing problems, out of focus shots, and bad dialogue that this could have easily been mistaken for a high school project that got a C-.

This will almost assuredly be a candidate for one of the worst movies of 2018.