THE OLD MAN AND THE GUN - Review

THE OLD MAN AND THE GUN

Plot: Based on the true story of a senior citizen who robbed dozens of banks 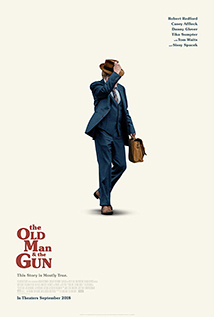 This is one of those films that is way better in the mind than it is in reality. Who wouldn't want to see a movie about an elderly gentleman escaping from San Quentin, robbing banks all over the place with a smile, baffling police everywhere, and charming the general public? It sounds great...on paper.

The harsh reality is, a guy that acts like a complete gentleman, even when he is robbing a bank is really endearing the first time. After that, it gets really boring. There is no action, no excitement. And nothing against senior citizens, but watching an awkward love story between to octogenarians isn't exactly big screen gold.

This movie could have easily been made in the 1980's. And by that I mean, it looks like and sounds like it was shot in the 1980's. It has the pacing, editing, camera movements, color, and music of a film that came out during the cold war.

It is a fun and charming film, but it isn't exciting or suspenseful at all. In fact the searching for him is downplayed quite a bit. There are a couple of moments were things pick up, but it doesn't last long.

This isn't the kind of cops and robbers flick that will bore you to tears, but you aren't going to be excited about it either. Save this one for a slow, rainy day when you are relaxed on your comfy couch. You'll either enjoy a decent film or you'll get a great nap. Either way, you win.

Tagged in: 2018 Casey Affleck Robert Redford The Old Man And The Gun True