Posted by Clint on Thursday, 13 February 2020 in Movie Reviews

Plot: A reporter falls for a woman while interviewing her for a feature about her mother 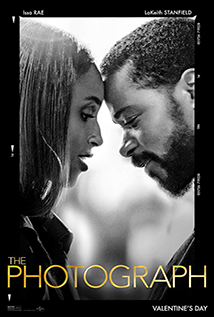 What do you get when you put two amazing actors in the lead roles of a film with a terrible script? You get two incredible performances in a bad movie.

There are a lot of people that should apologize to LaKeith Stanfield and Issa Rae for wasting their talent in a film like THE PHOTOGRAPH.

First of all, the title isn't even right. It should have been called The Photographer, or Miss Mae, or The Letter, or a thousand other ideas that would have been more fitting.

Second, this is one of those strange films where there is so much going on, but nothing ever happens. It feels like there is a hurricane blowing, but the plot is only affected by a slight sea breeze. In the distance we can just make out the chaos and conflict, but it never really gets close enough to the main characters to force them into uncomfortable situations.

The story follows the love story formula completely. There are no deviations from it. It's essentially a "find and replace" movie with the settings and characters changed out, but everything else is like it always is in mediocre tales of love.

This is a slow-moving mashup of too many stories that doesn't give you enough time or information to care about any of the characters except for the leads. Thankfully, Stanfield and Rae are great enough to make this movie at least tolerable. They act well together and they have great on-screen chemistry. Without them, I fear it would be nearly unwatchable.

Aside from the great acting, the only other positive of note is the music. Basically, it feels like you are listening to Saturday Night Slow Jams for almost two hours. That's never a bad time.