THE POSSESSION OF HANNAH GRACE - Review

Posted by Clint on Friday, 30 November 2018 in Movie Reviews

THE POSSESSION OF HANNAH GRACE

Plot: A city morgue worker must deal with a demon-possessed corpse 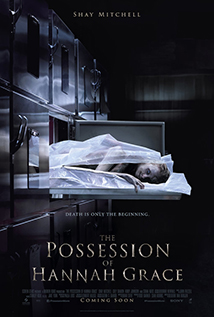 This is the time of year when all of the heavy hitters hit the theaters all vying for the top awards in cinematic excellence. It is also the time of year where studios like to drop off some of their terrible flicks in the hopes that the movie you really want to see is sold out, so you end up settling on something you never would have gone to the theater to see.

This film will be up for exactly zero awards.

There is almost nothing scary about this film. There are a couple of jump scares that are bland at best. The dead girl crawls in a creepy way and makes icky noises when she moves, but there isn't anything really scary about it. In fact, it's more laughable than it is scary.

The pacing is terrible as well. The first 30 minutes drags on forever and then when we finally get to the part of the movie that should be scary and interesting the whole thing is over in about 3 minutes.

The best part of this movie are the trailers that play before it. There are a couple of horror flicks coming in the next few months that look like they could be good. I wish I had left the theater after the last trailer. My life would be better for it.

Don't waste your time or money on this one. And if you do get pushed into going and the person you go with says they liked it, you should closely examine their life choices.

As with almost every horror flick they set this one up for a sequel. Unless it is called THE POSSESSION OF HANNAH MONTANA you can just go ahead an mark me down as a no-show.