Plot: The story of the battle between the U.S. government and the press after the leak of thousands of documents relating to the Vietnam conflict. 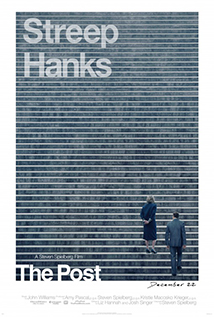 If ever a movie screamed "OSCAR" this one would be it. It stars Mr. and Mrs. Perennial Award Favorites, it's directed by Steven Spielberg, it's a drama about the press versus the government, and it's a period piece. It will most assuredly be a contender, but this year is so full of great movies it probably won't win anything.

This pacing of this film is surprisingly quick. It is also significantly more suspenseful than one might imagine it to be. There is a scene where one guy writes an article while everyone else stands around and watches, and it is riveting. You'll just have to trust me on that.

The acting is outstanding, the music is beautiful and the story is fascinating. It is a wonderful film throughout. However, it does have a couple of moments that are questionable. There are some scenes that either don't make a lot of sense or could have been cut from the movie completely. But, overall those are minor issues.

THE POST is a great, action-filled, dramatic, and powerful movie worth your theater dollars.