THE SUN IS ALSO A STAR - Review

THE SUN IS ALSO A STAR

Plot: A guy tries to get a girl he just met to fall in love with him on her last day in New York City 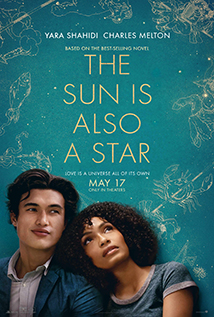 The premise is okay, but the execution is so incredibly non-realistic that it gets to the point of laughable. I found myself checking my watch and letting my mind wander several times while waiting for something at least semi-exciting to happen. Perhaps a better title for this movie would be A BORING, SLOW WALK AROUND NEW YORK CITY.

Worse yet, there is no chemistry between the main characters. He comes on way to creepy and forceful and she is going against every natural thing she would be doing on her last day in the city she loves. Not once did I root them on to get together, because they never got me to care about them or their relationship.

Then the movie falls off the rails completely in the third act. There are so many things that make no sense, and so many coincidences that happen that you can't help but sit in disbelief and roll your eyes.

On the plus side, if you are a fan of New York, this film is a great guide to a lot of the cool landmarks in the city. It almost feels like this was a really long, poorly written, ad for the New York Tourism Board.

In the end, this movie asks one basic question. What would you do if you only had one day? My answer would absolutely include skipping this movie.