Plot: A wealthy man with quadriplegia hires an ex-con with no experience to take care of him 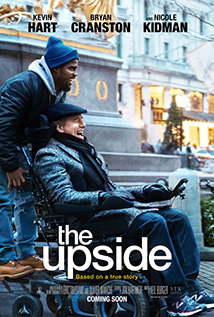 January is typically a pretty bad month for movies. All of the big awards stuff is crammed into the last several weeks of the previous year, and then January gets the leftovers. Well, somehow, this little gem of a film slipped through the system and landed in January.

Maybe it's a new trend? After all, one of the first films released last year was PADDINGTON 2 and it made my Top 10 Best Films of 2018 list. I don't think this one is going to be that special, but it is really good.

Bryan Cranston and Kevin Hart have great chemistry. They are funny, their conflict is powerful, and you can feel the love and admiration they develop for one another over time. Add in and exceedingly straight-laced Nicole Kidman and this movie levels up to superstar status.

Yes, this movie is formulaic and almost sappy at times, but it never feels like it gets out of control. It is a touch too long. It probably could have had a good 20 minutes cut out and been just as good of a movie, if not better. Because it is so long, (just over 2 hours), it has some pacing issues, but they aren't so bad that the movie loses its overall momentum.

If you like films about overcoming obstacles, this is a great film for you. It's also really funny for those of you just wanting to laugh during the dreary months of winter.