THE WAY BACK - Review

Posted by Clint on Friday, 06 March 2020 in Movie Reviews

Plot: A broken man tries to overcome the demons in his life through coaching high school basketball 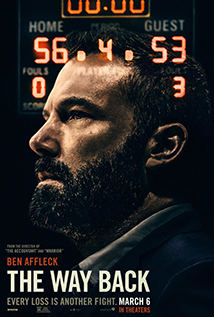 Ben Affleck is spectacular in an otherwise average movie. He gives one of the best performances of his career. A performance that he describes as "very therapeutic", since he started filming this film the day after he got out of rehab from his very public relapse. He also owes a huge "thank you" to his ex-wife, Jennifer Garner, who called the director and saved the film from being shelved, even before production began, after Ben fell off of the wagon.

I'm happy for him that this movie got made. Especially if it is helping him to stay sober. However, I wish they had made a better film. I couldn't help myself from comparing this movie to HOOSIERS. And this one doesn't even come close to it. I didn't want to do it, but I'm a child of the 80's.

It's too long, is has severe pacing issues, (to the point that after one scene I thought the movie was over, but we still had another 35 minutes to go), only one of the other characters are developed, and the timeline doesn't make any sense. (There is one point where the team's regular season ends and something happens that should take several weeks to several months to accomplish, but it is all done before the kids play their next game).

This isn't a bad movie, but it isn't great either. It's not one that stays with you like HOOSIERS does. If you want to see a good basketball movie with a broken coach, watch the one with Gene Hackman. You'll be a lot happier that you saved your money.

Tagged in: 2020 Ben Affleck Drama Sports The Way Back