Plot: Woody and his friends must do everything they can to find and return Forky, Bonnie's favorite toy, to her 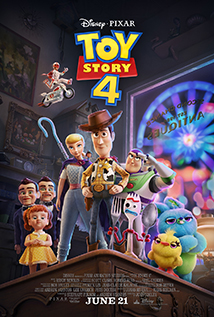 It's hard to believe, but it has been nine years since the last TOY STORY film hit the big screen.

It was worth the wait.

This new film is another classic in what could be considered one of the best kids' movie franchises ever. It's not the best of the four, but it will be for some people.

Perhaps the best part of this movie is the addition of the new characters. Of course we have Forky, voiced by the hilarious Tony Hale. He is central to the plot and gives us a fun new take on learning that he is a toy. We also get to meet Duke Caboom, Canadian Stuntman, played by Keanu Reeves. To say that Keanu is on a hot streak right now would be an understatement. And he proves it once again by voicing a bit character that steals every scene he is in. Finally, we are introduced to Ducky and Bunny, voiced by Keegan-Michael Key and Jordan Peele. Their impromptu banter is fantastically funny and steals the whole movie.

While the story may seem similar to the other films, (one character gets lost and the rest have to rescue them), this one feels and is different. There is some pretty amazing character development going on for a kids' movie, as well as some pretty deep philosophical thoughts, but it all plays well for the younger crowd.

As with the former TOY STORY films this one will have you laughing until your jaw hurts, but it will also have you crying into your bucket of popcorn. And I'm not talking happy little tears during a sentimental moment. No, I'm talking three-tissue, ugly sobbing. So come prepared.

If you are looking for something to do with the kids this week, this has to be your #1 choice. You don't want to miss out on one of the best movies of the Summer, and possibly the best animated film of the year.