Posted by Clint on Saturday, 11 April 2020 in Movie Reviews

Plot: The Pop Trolls find out there are many other Trolls in the world, but the Rock Trolls want to take control over all of the other Trolls 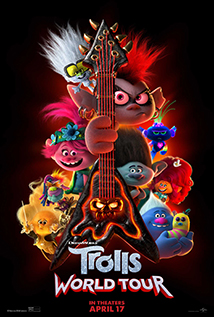 Four years ago, I took my daughters, then 4 and 6, to see TROLLS. The music was great, the girls were mostly entertained, but the story was pretty bland. Last night, we had a home movie night and watched TROLLS WORLD TOUR. My girls are now 8 and 10, and the age difference made the difference.

While the 8 year old enjoyed the movie for the most part, she hasn't shown any interest in watching it again even though she knows we can watch it as many times as we want to in 48 hours. The 10 year old was both bored and annoyed by the whole thing. I asked her why, and she told me she couldn't really give me a solid reason, she just didn't like it.

This movie was thoroughly useless. The story was so thin that they has to resort to adding in several minutes of weird filler scenes that had nothing to do with advancing the plot. And most of them weren't even funny or entertaining.

Next, the story that was there, was okay, but we see it all of the time in kids' movies. It's the "We're all better together when we are different." Sure, that is a nice and true sentiment, but do we need to have that be the central point of every single kids' flick? No. There are thousands of other compelling and worthy story lines and lessons that can be explored. This one has become stale and tired.

Finally, I'm sure that Rachel Bloom, the voice of the Rock Queen, is a lovely person in real life, but why she was chosen for this role will be a question that can never have a satisfactory answer. The only great things about this movie and the first one is the music. And Rachel can't sing. Believe me when I say, this is not a slight against her. She does the best job that she can, and it is passable, but if you are going to have a character that sings as much at talks, why on earth wouldn't you hire someone with amazing vocal abilities. Someone like Lzzy Hale, or Haley Williams, or Taylor Momsen, (I mean, she's already an actor, too!), would have made this movie so much better.

I know it is a weird time and we are all trying to do whatever we can to keep the kids entertained. But $19.99 is a lot of money to spend on a movie like this. Personally, I would wait until the price drops down below $5 before I would even consider renting this one.