Plot: A man at the end of his rope puts together a basketball team of former greats to see if they can win one more time 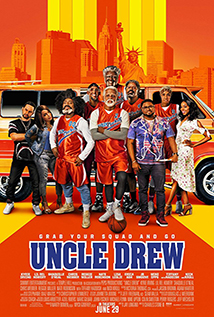 When I saw the trailer for this film it made me hate most of my life choices leading me to see it. But, as with all films, I go in with an open mind hoping that it will be the best movie of the year. While UNCLE DREW is far from great, it is a lot of fun and will make for a good night out with your friends.

It is formulaic and predictable, but that isn't necessarily a bad thing with this movie. It's a sports comedy that doesn't try to be anything else. It does what it came to do and leaves all of the frivolous stuff to the side.

I want to give kudos to the makers of this film because one of my biggest pet peeves with sports movies is that the sports are not played in the proper way, or at a high level. This film is filled with incredible basketball. It's like a 100 minute highlight reel.

The other fun thing of note is, if you are a basketball fan, be on the lookout for several Easter eggs and funny moments that most of the audience isn't going to notice. They make the movie so much better.

Another nice feature of this flick is that it is almost completely family-friendly. There are only a couple of bad words, and one scene where we see a guy's backside in a hospital gown, but other than that it's a good film for the whole family.

If you are wanting a fun night out with plenty of laughs, UNCLE DREW should satisfy.