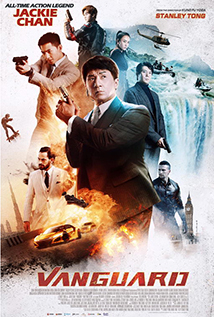 VANGUARD is the best comedy of the year. There is only one problem. It's not supposed to be a comedy.
From the amateurish CGI lion, to the car chase scenes filmed at 30 miles per hour and then sped up on film, to the early 1990's-looking graphics superimposed onto large computer monitors, it looks like the effects budget for this movie was somewhere around $36.25 (plus tax). But the good news is the bad effects make for some great laughs.
Aside from the effects (and some truly atrocious, yet refreshingly hilarious, acting by about half of the cast), the rest of the movie is pretty good. The plot is interesting and the action is great. I enjoyed watching the whole thing. I even enjoyed cringing through the car chase scenes, and awkward confrontations where it was quite obvious the actors were hired for their fighting skills and not their ability to deliver dialogue.
I'm probably being a bit too harsh on the actors. This is a Chinese film, shot with 90% Mandarin dialogue. If it were the other way around I wouldn't want to be judged on how poorly I was speaking my Mandarin lines in an English film. So, all is forgiven there. But, that still doesn't make it any less funny.
This is the kind of film you have to go into knowing exactly what you are paying for. As long as you understand that it is so bad that it is good, you and your friends will have a great time. If you are going in hoping to see a moody action film, you are going to be very disappointed.
I can't recommend seeing this one in theaters, but if you want to help the theaters out while they struggle through this pandemic, at least you know you will be entertained and get some good laughs out of this movie.
Tagged in: 2020 Action Chinese Jackie Chan Vanguard