Plot: A man discovers, after a world-wide blackout, that he may be the only person on earth who knows about the band and the music of the Beatles 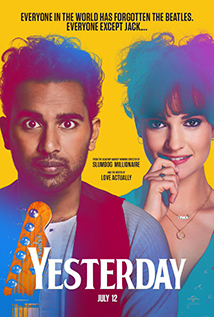 Rom-Coms aren't usually my favorite films to see, but I know a good one when I see it. This one goes far beyond good. It could very well be in my top 10 films of the year when 2019 comes to a close. I thoroughly enjoyed every minute of it. I was completely wrapped up in the story throughout the entire movie.

Himesh Patel is incredible in the lead role, but Lily James completely steals the show. As far as I'm concerned, she can do no wrong. Both actors are endearing and lovable within the first few minutes of the film. And better yet, I found myself cheering hard for them through the entire story. Their chemistry surged through the screen and into the theater.

I loved the fact that this is a very British film. There are several jokes that require a British sense of humor and the movie is filled with British slang terms. It was fun trying to figure out everything they were discussing.

The film is so well done that if there are any pacing issues they are very minor. The story is fun, exciting, funny, heartwarming, tragic, and beautiful. The characters all have their own voice and each brings something special to the story. And of course, this film has one of the best soundtracks of all time.