Posted by Clint on Friday, 01 March 2019 in Movie Reviews

Plot: The whole family gets together for a funeral, but there is a lot of drama happening behind the scenes 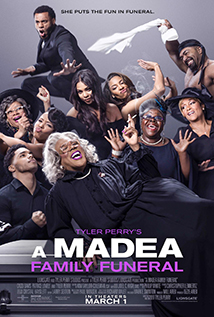 I was pleasantly surprised by this film. Typically, Tyler Perry doesn't like to bother with things like plot, or character development, or multiple takes to get a scene right. But he seems to have put a lot more effort into this MADEA film than the last couple.

This film has several funny moments, some compelling drama, characters that the viewer can care about, and I didn't notice a single overdub of dialogue. For the first time in a long time I'm happy to say that this is a Tyler Perry film that is worth seeing. Now, that doesn't mean you should spend theater prices to see it, but when it is released digitally it will be worth the rental.

Perry also discovered the magic of the editing room. Instead of having ad lib scenes that drag on seemingly endlessly, his "entourage" hit with their best jokes and then moved on quickly to something else. It's refreshing to see a MADEA film with good pacing.

This may be the best MADEA film since the original. It's not great by any stretch of the imagination, but it is funny enough and entertaining enough to make for a fun evening.

As always, stick around through the credits for the outtakes, they are the best part of the movie.