Plot: A woman feels like she has been the victim of a con by the man she loves 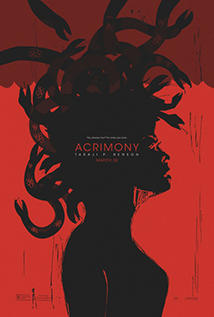 I am a huge fan of Taraji P. Henson. She is amazing in just about every film she's ever been in. Even bad movies, she makes them better. That is until Tyler Perry put her in this stinker. Not even the great Henson can save ACRIMONY from being anything other than a ridiculous whirlwind of stupidity and poor film making.

Henson's character is so unlikable from the start that I never really cared if what she was saying was true or if she was crazy. And by the end of the movie I just wanted everyone to go away. If they died, fine. If they ran away, fine. Just get away from me.

There are several laugh-out-loud moments in this film. Unfortunately, there aren't supposed to be any. It's just that some of the things that are happening are so utterly ridiculous that you have to laugh. And, as with all of the other Tyler Perry films, there are so many continuity and plot mistakes that it's obvious he didn't care about the final product. If he doesn't care why should we.

Skip ACRIMONY or you might find you'll be divorcing yourself from the theater before the movie ends.