Plot: Camera crews follow a Penguin named Steve around the Antarctic while he searches for friendship and a mate 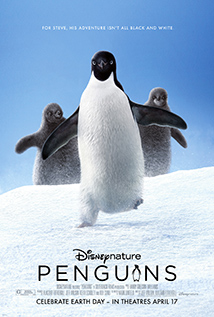 It's hard to believe, but this is the 10th DisneyNature film release. We've gone all over the globe with the team and now we get to see the incredible scenery of the Antarctic in PENGUINS.

The film follows the antics of a klutzy but adorable penguin named Steve. It shows his journeys, looking for a mate, and trying to raise a couple of kids in the world's harshest environment.

As with all of these movies, the cinematography is the true star. They are all beautifully shot, making the whole film a visual treat.

This film is fun, exciting, somewhat suspenseful, and great for the whole family. There are a couple of scenes that you may need to cuddle your more sensitive little ones, but most kids will be fine experiencing this film.

Make sure you stick around for the credits. To me this is always the best part of the movie. They show bloopers and how the penguins were filmed. It is a lot of fun and interesting to see how hard it is to get the shots that make these films so wonderful.

Posted by Clint on Monday, 24 April 2017 in Movie Reviews 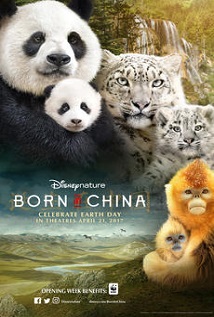 I'm a sucker for a good Disney flick, and when you throw in a baby panda, you had me at "awwwwww".

These yearly DisneyNature films have all been outstanding. This on is no exception. The cinematography is incredible, the stories are well told, and it clocks in at an hour and 19 minutes.

My only warning about this film is that it is Rated G, but there are "circle of life" moments where animal death is a part of the story. It is handles well and carefully,  but if your child is old enough to understand what is happening you might have some wet eyes to deal with.

Aside from that, this is a wonderful, must-see film.