Plot: A young lion tries to find his way in life in order to be the king he was born to be 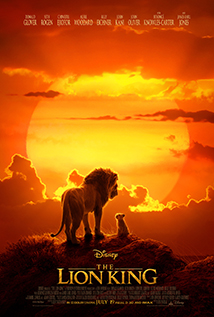 When Disney released the animated version of THE LION KING in 1994 it was a game-changer. It was innovative, beautiful, and an instant classic. Now, 25 years later, in the midst of Disney remaking many of their classics into live-action films, we return to Pride Rock, but it feels like we are Simba returning after Scar messed everything up.

This is one of those movies where the studio said, "We can do this!" But they never stopped to think if they should do it. This new version does nothing better than the original. In fact, it does a few things much worse. For example, this version clocks in just shy of 2 hours, so it feels really slow. Next, it adds a new song that is useless, boring, and totally out of place. Then, the love story between Simba and Nala does not play out well and feels rushed. Finally, all of the lions look the same, so it is really difficult to tell them apart in certain scenes.

Perhaps the most disappointing aspect of this film is that it is essentially a shot-for-shot remake of the original. There is no updated story line, there are no new and innovative scenes, and the songs feel off because they are sung in a different way than we have been singing them for 25 years.

And while I find Donald Glover to be a fantastic actor, this is not a good role for him. He makes Simba feel aloof and meek, even when he is standing his ground to become king. I don't necessarily think that it was his fault, but Director Jon Favreau should have done a better job of making Simba sound more leader like and authoritative.

On the positive side, the movie is beautiful, and the animals are fun to watch, but there is nothing about this movie that makes it better than the original. Save yourself the money and the hassle of going to the theater and just watch the original at home.