Plot: After a teen tells his parents he is gay they send him to a conversion therapy facility 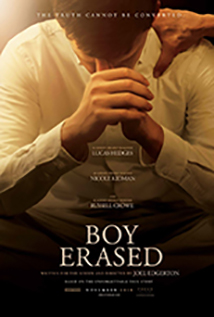 This may not make a lot of sense yet, but I was a bit disappointed that this film was so easy to watch. When I saw the trailer I thought we were going to be in for a tough two-hour journey that would have me uncomfortably squirming in my seat. I wanted to witness the hell this kid went through, I wanted to feel his pain. Instead, there are only a couple of scenes where things start to get intense and then the camera cuts away. This is the kind of film that needs to be bold and make a splash if it is going to get any kind of recognition. Unfortunately, it pulls its punches.

Lucas Hedges does a nice job as the tormented teen, but I never really bought him in the role. It just didn't feel right. It isn't his acting skill or lack thereof that cause the issue, he just wasn't a good fit for the role.

The first hour of the film is dreadfully slow. I looked at my watch three times. I rarely do that during a movie unless it is just dragging along. Thankfully the last 40 minutes are much better. Once the movie hits its stride everything starts working together to make it the kind of film worth seeing.

One of the things that I liked about this movie is that it did not portray religion or the followers of that religion in a bad light. It offers legitimate arguments on all sides. I don't like being preached at by any movie on any subject. I never felt like this one got preachy.

If you know anyone that has gone through conversion therapy this is a good film for you. For almost everyone else it is an okay film that does a good job telling a fascinating story, but it could have been so much better.