Posted by Clint on Friday, 15 February 2019 in Movie Reviews

Plot: Tree is unwillingly pulled back into the time loop that trapped her before, but this time she knows why and has to figure everything out to end the cycle before she is gone forever 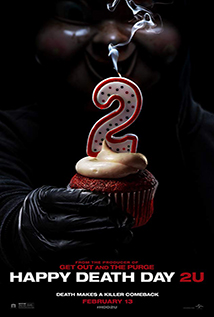 The first film in this franchise was a thrilling surprise. It's not exactly a horror film in the truest sense of the genre, but it is one of my favorite horror films of all time.

And this one is even better.

Yes, you read that right. The sequel is better than the original. It is so much fun, and smart, and scientifically nerdtastic all the way through. The characters are great, the acting is way above average for a horror flick, and the story is compelling and exciting enough to keep the viewer engaged.

The story is filled with a lot of twists and turns, funny moments, surprising character depth and emotion, and suspense. You can try to figure out the twists, but I'll be surprised if anyone figures it out before the big reveal. (Even though there are plenty of hints).

This is much more of a comedy/mystery/suspense film than a true horror flick. So, if you aren't into the horror genre, it's okay, you can still see this one, because it really isn't that scary at all. I do highly recommend seeing the first film in the franchise before you go to this one. There are a lot of inside jokes that will only be funny if you see them in order.

For horror fans, and fans of the first film, this is a must see movie.

Posted by Clint on Friday, 13 October 2017 in Movie Reviews

Plot: A coed must relive the day of her murder over and over until she figures out who killed her 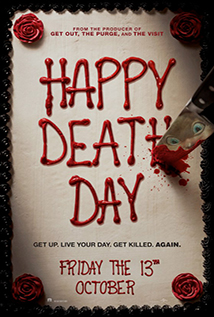 If you like horror films, you'll probably find this one to be fun and somewhat unique. The premise is odd and never explained, but as long as you are willing to just go with it and enjoy the story for what it is, you'll most likely be satisfied.

The best thing I can say for this movie is that I didn't have one single moment where I rolled my eyes at the stupidity on the screen. As campy as it is, the story is actually fairly smart and interesting.

There are some good twists and turns that will keep you engaged. And, for a horror flick, the acting is pretty good.

If you need a couple of good scares, this film will be well worth your time and money.