Posted by Clint on Friday, 14 February 2020 in Movie Reviews

Plot: A hedgehog with superpowers is on the run from people that want to use him for his powers 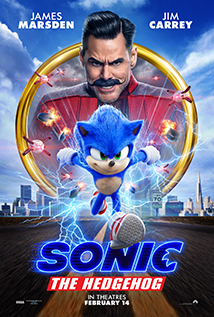 If you are a child of the 80's and 90's then Sonic The Hedgehog is a major character in your upbringing. That said, there were a lot of feelings about this movie long before its release date. Especially when the first trailer came out and the entire world revolted at the look of Sonic, forcing the director to make a public statement saying Sonic would be changed to look more like the original Sonic before the theatrical release. They did, and he does.

As for the film, it is fun. It's not some great, comedic masterpiece, but it has several good laughs, a decently compelling plot, and it moves along at a quick and steady pace. I was in a theater full of kids and very few lost interest along the way.

As with just about every film he's been in, Jim Carrey overacts every single line of his performance. It's funny, but it does get a bit old and tired by the end. Thankfully, the rest of the cast keeps the film on track.

If you are looking for a fun outing with the family, this movie will satisfy. Kids and adults will be entertained. For the adults, it won't give you the nostalgia that you might be hoping for, but it's still entertaining enough.