Posted by Clint on Friday, 08 November 2019 in Movie Reviews

Plot: A no-nonsense fire chief finds himself having to figure out how to handle three precocious children 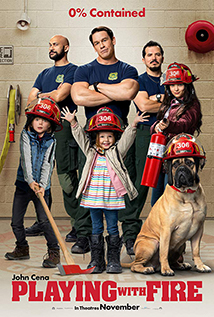 John Cena has quickly become one of Hollywood's top choices for comedies. And rightfully so. He is outstanding as the straight guy that finds himself in ridiculous situations. What is surprising is how well he pulls off the heartwarming and lovable acting requirements. He made this movie much better than it would have been with someone less talented.

The film isn't great, but it is filled with laugh-out-loud moments and it is entertaining for the whole family. My seven year old laughed hard several times and one time she laughed for three minutes straight. I thought she was going to pass out from lack of air.

The story is simple, the editing is terrible, but that all can be forgiven since it is so funny and keeps the kids entertained all the way through the movie.

This isn't the kind of film that kids will want to see again and again, but it is one that they will be happy they saw.

If you are looking for something fun to do with the family this weekend, this movie would probably be a fun choice.

Posted by Clint on Friday, 06 April 2018 in Movie Reviews

Plot: Three parents try to stop their children from going too far on Prom night 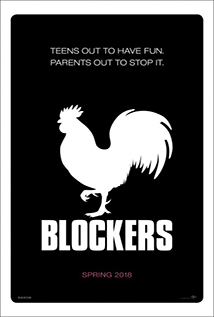 BLOCKERS, (because nobody is allowed to say or print the real, full title of this movie for fear of getting in trouble from the censors), is a fun, funny film that has some heartwarming moments, and some of the most cringe-worthy scenes you will ever witness on the big screen.

It is a coming-of-age story for the kids in the film, but it is also a coming-of-age story for their parents as well. We see the kids start to realize that actions have consequences, while the parents begin to understand that their children need to have room to make their own choices and learn from their mistakes. Fortunately for us, the path they all take to get there is laugh-out-loud funny.

For those of you looking for a fun comedy, you need to know that this film is very R-rated. If you aren't a fan of continuous raunchy jokes, ridiculously awkward scenes of intimacy, bad language, and drug use you should steer clear of this movie. If you don't mind the mature nature of this film, you will laugh until your jaw hurts.

While the acting is nothing special, there are a couple of stand-out performances by the teens. John Cena also proves to the world that he can hang with the best of them when it comes to physical comedy.

BLOCKERS isn't a movie for everyone, but it is a comedy worth seeing.