Posted by Clint on Thursday, 24 October 2019 in Movie Reviews 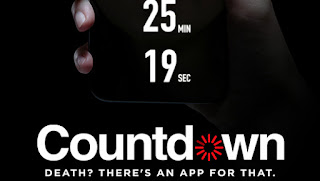 Plot: An app that tells people when they will die becomes all too true for the people that download it 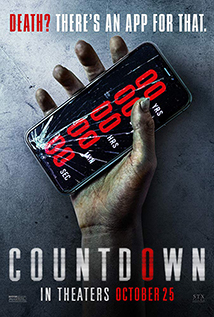 Horror has had a difficult time moving into the 2010's. The genre has tried several times with movies like UNFRIENDED and ESCAPE ROOM to bring technology into the story line, but it has yet to be really successful.

This movie may be the best so far in mixing today's technology with creepy horror.

If you like going to horror flicks for all of the jumps and bumps, this movie is one of the best of the year. There are a ton of jump scares to keep you reaching for the hand of the person sitting next to you. It also has one of the creepiest looking bad guys ever.

The story is pretty decent, too. It's not anywhere near amazing, but for a horror flick they did a good job with keeping the flow moving and even making fun of a couple of the old, tired horror cliches. Yes, it is filled with mediocre/bad acting and eye-rolling moments, but it also knows what it is and where it is going and it never tries to take itself to seriously.

If you like horror flicks, go for it. It's not going to be one of your favorites, but it will get you into the Halloween mood. If you aren't a fan of being scared then stay away from this one.