Posted by Clint on Friday, 22 March 2019 in Movie Reviews

Plot: A family's life is put in jeopardy when dangerous people that look just like them begin to terrorize them 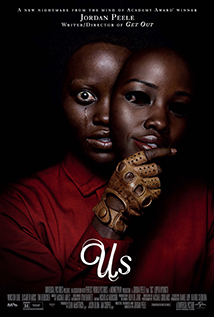 GET OUT was one of my favorite films from 2017. Because of that I was really looking forward to the second horror flick from Jordan Peele. Maybe I was looking forward to it a little too much. As the credits began rolling at the end of my screening of US, I sat in silence trying to figure out what I had just witnessed.

At first I thought it was just me. I thought I must have missed something. Then, slowly, I began to notice other people around me with the same puzzled look on their faces. Finally, one man spoke what I think most of us were feeling, "I am so confused. What the BLEEP was that!?"

After a few days of letting the film sink into my brain I've come to these conclusions:

1. I liked the movie. I didn't love it, but it was suspenseful and crazy enough to keep me interested and engaged even though I wasn't sure what was happening.

2. It's Jordan Peele's fault that we were confused, not the audience. At the end of GET OUT we all got it. All of the nuance and symbolism, all of the thematic elements and the overall plot made sense. A good writer makes sure you don't have to be the smartest person in the room in order to understand what the film is about. Peele failed to accomplish this task in US.

3. Lupita Nyong'o is one of the best actors in Hollywood today.

4. There is a lot more to this film than I got in one viewing. I have theories about the underlying themes of the movie, but I will need to see it again before I am willing to talk about those in public.

I wish I could be as excited about recommending this movie as I was for GET OUT, but it is too confusing, and therefore not as good as Peele's first film. If you are going to see this in theaters, try to pay matinee prices, otherwise you might feel like it wasn't worth it.

Posted by Clint on Friday, 24 February 2017 in Movie Reviews

Plot: A young, inter-racial couple go to her parents' house for the weekend, but things take an unexpected turn when they get there 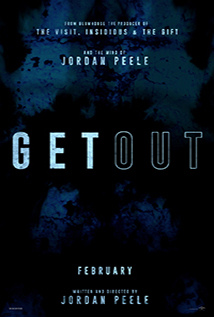 I must admit, when I saw that this was a horror film written and direct by Jordan Peele I was a bit skeptical that the comedic genius could switch genres and make a decent film. Well, he did more than that, he made a GREAT movie full of suspense, comedy, and racial satire.

GET OUT is suspenseful, but it isn't scary per se. There are a few jump-out-and-say-boo moments, but those are there just for show. The real creepiness of this film is in the story. As the movie progresses and the puzzle pieces fall into place you'll repeatedly hear people around you yelling "GET OUT" at the screen.

Not only is this film suspenseful, it is also incredibly funny. There are a couple of characters that will have you in tears because of their lines. The TSA agent may be the funniest character I've seen this year.

This movie is also a fascinating satire on race relations and how some people are blind to their own racial tendencies even if their intentions aren't racist. Some of the scenes will make you squirm in you seat because they are so uncomfortable to watch.

Jordan Peele has managed to accomplish something with this movie that few other people ever have. He's made a socially-relevant film hilarious and a ton of fun to watch. Now is the time to get out of your house, get out to the theater and see GET OUT today.

Posted by Clint on Friday, 29 April 2016 in Movie Reviews

Plot: Two suburban guys pretend to be gang bangers in order to get their kitten back 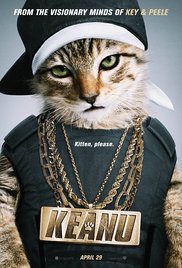 Key and Peele are hilarious. If you haven't seen their work, go to YouTube and spend a couple of hours laughing uncontrollably. Unfortunately, KEANU is not their best work. It is funny in many places, but it never gets to the point where you can't breathe because you are laughing so hard.

If you do see it, make sure to stick around to the end of the credits. There is a setup for a sequel.

While this isn't a great movie, it will give you a few good laughs if you go. I will say that the kitten is adorable, so there is that.