Plot: A father and daughter are trapped in an alligator-infested house during a massive hurricane 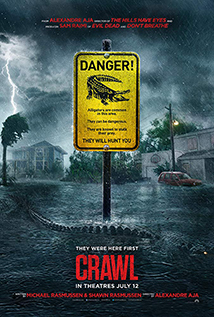 Okay, let's be honest. This is a movie about two people trapped in the basement of a house, surrounded by alligators, during a category 5 hurricane. The whole thing is ridiculous from the word go. But, in this case, that is fine, because this movie knows exactly what it is and it stays in its lane.

CRAWL has no plot to speak of, no character development, no twists and turns. It is simply a film filled with gratuitous alligator violence with a bunch of wind and rain thrown in, plus a few of Hollywood's finest extras for the sole purpose of becoming alligator food.

This movie does a great job of playing on everyone's fear of being trapped in murky waters with a 17 foot monster ready to attack at the slightest provocation. It is filled with suspense for 85 of the 90 minutes. (The first five minutes is a sad attempt to try to create an actual story, but don't worry, that doesn't get in the way of the dinosaurs and their demolition derby).

Posted by Clint on Friday, 26 January 2018 in Movie Reviews

Plot: Thomas and his friends try to rescue another friend from WCKD's final strong-hold. 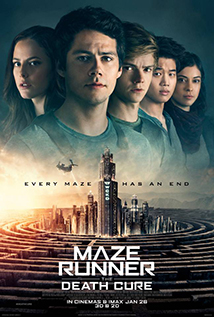 If you are a fan of the MAZE RUNNER franchise, this is a great ending to the trilogy. The films have gotten better as the series has progressed.

This third, and final, installment is full of suspense, intrigue, and edge-of-your-seat action. It gives us some long-awaited answers, and a satisfying ending. It also gives us some nice moments with characters we've grown to love over the course of the series.

As with the other films, the acting isn't great, the dialogue is pretty basic, and there are a few plot holes that will irk you. Aside from that, this is a fun film that will give you a good 2+ hours of escaping reality.

This isn't the kind of movie that is going to be winning any awards, but it is one that is well worth seeing. If you haven't seen the first two, you should do that before seeing this one otherwise you will be lost.

Plot: The Gladers face new obstacles and foes as they find themselves almost back where they started. 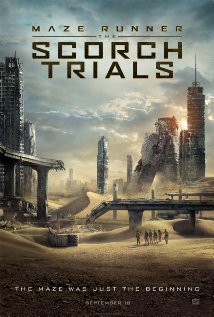 The second installment of the MAZE RUNNER franchise is action-packed, intense, suspenseful, creepy and better than the first one.

If you haven't seen the first one don't bother with this film, you will be lost. If you have see the first one, make an appointment to see this film as soon as possible. You will enjoy it.

Fans of the book series will also be pleased because the movie sticks fairly close to the book.

If you are looking for a suspenseful action flick with fast-moving zombies then I would suggest this film for your weekend viewing pleasure.