IF BEALE STREET COULD TALK - Review

IF BEALE STREET COULD TALK

Plot: A young couple in love try to make a life for themselves while going through pregnancy and being accused of a crime he didn't commit 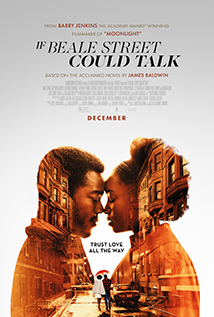 Director Barry Jenkins has proven once again that he can make outstanding, award-worthy films that are also accessible to the average movie-goer. His films are beautiful, important, and timely, but they never feel overdone, or pretentious, or self-congratulating.

The acting is easily some of the best of the year. Regina King is getting a lot of awards buzz, but KiKi Layne's performance is just as moving and powerful. I'm surprised she isn't getting more awards attention.

This is a slow-moving story, but it never feels like it gets too slow. The pacing is perfect. It gives just enough time to sit in each scene and really take in all of the beauty and meaning. This is a master class in dramatic film.