Posted by Clint on Friday, 15 November 2019 in Movie Reviews

Plot: The Angels must try to stop the sale of a technological device that can be weaponized 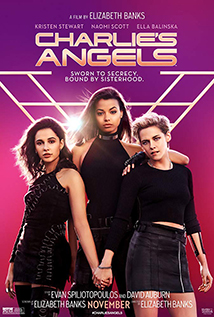 I'm not really sure that in 2019 the world was clamoring for another CHARLIE'S ANGELS reboot, but we got one anyway. Thankfully, it isn't terrible.

This reboot is more "women power" than the previous iterations, but it still feels like it spends a lot of time objectifying women. Apparently the only way to fight crime is while wearing skin tight booty shorts.

The plot is one we've seen a thousand times in spy flicks. There is nothing new or special to make this movie worth your time. The acting is okay, but nothing special, and the dialogue is pretty cheesy.

There are a few exciting and somewhat suspenseful scenes, but it isn't like the whole movie is that way. In fact most of the film is pretty slow-paced. It does pick up a bit towards the end, but not enough to make up for the slow start.

The best part of the flick is the last few minutes where we get a ton of fun and funny cameos. That is about the only thing that makes this a movie worth watching.

If you like formulaic spy movies, then you may find this one tolerable, but it isn't one you are going to be overly excited about seeing.

Plot: A boy from the streets falls for the princess and a genie helps him find out who he really is 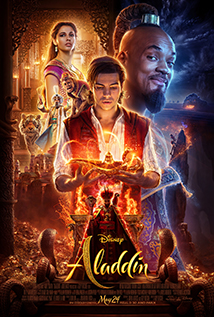 The 1992 animated film will always have a special place in my heart. It is the film my wife and I saw on our very first date. Therefore, I was really nervous when they announced this live-action reboot. But now that I have seen the movie, I can say that it is just as great and fun as the original.

This film is a visual feast. The colors, the costumes, the sets, and the scenery are all amazing. It wouldn't surprise me at all to see this up for a couple of Oscars for costumes, cinematography, and/or production design.

The only thing I didn't like about the movie is the same thing I don't like about most movies from director Guy Ritchie. He loves to get super artistic and quirky with some of the shots, which pulls people out of the story and forces them to notice the oddity of the shot. This time he does it by slowing down or speeding up the action during several of the musical numbers. I am a firm believer that the job of the director is to keep the viewer in the story, not to show off the new thing they like to do.

It is important to note that this is a slightly different story than the original. Also, since it is a live-action movie we get a lot less from Rajah the tiger and Iago the parrot. But we do get a much more ruthless and cunning Jafar. We also get a much more competent Sultan, and a hilarious handmaid to the princess.

The main actors do a wonderful job as Aladdin and Jasmine, and Will Smith is great as the genie. I commend him for taking on this role and dealing with all of the blow-back over the last several months. Robin Williams's genie is one of the most iconic characters in movie history. To try to be the guy after the guy is a daunting task that is rarely successful. Smith does a great job of making the character his own, while still paying homage to his predecessor.

Overall, this is a wonderful film. It stays close to the classic, but it feels updated for today. Especially with the new song added for Jasmine's character. If you are a fan of the original, you should give this one a shot. And for those of you with young kids, this would be a wonderful film to introduce them to the incredible magic of Disney movies.