Posted by Clint on Thursday, 08 October 2020 in Movie Reviews

THE LIE
Rated: R
Release Date: October 6, 2020
Director: Veena Sud
Stars: Joey King, Peter Sarsgaard, Mirielle Enos, Cas Anvar
Plot: A family tries to keep a terrible secret, but there is more to the story than anyone knows
Trailer
Clint Says: It's worth streaming once 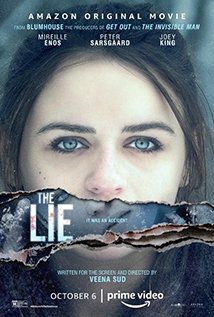 NOTE: This film is part of a unique collaboration between Amazon and Blumhouse Television. The two studios are releasing four films over the next two weeks and doing several virtual party screenings called "Welcome to the Blumhouse" through Fantastic Fest and Fangoria.
Joey King has come a long way since her days as a bit player on THE SUITE LIFE OF ZACK AND CODY and as Beezus's little sister, Ramona. She has proven time and again that she has incredible range as an actor, deftly moving between genres like horror and romantic comedy. She has always been a scene stealer, and this film shows that she can play a serious lead giving a powerful and emotional performance.
That's the great news about this film.
The good news is that THE LIE is a suspenseful thriller that will keep you on the edge of your seat and trying to guess what is going to happen next. It's a compelling story filled with wild twists and issues that escalate quickly and wildly.
The bad news is all of the good news rests on top of a very fragile house of cards. This film has one of the biggest, and worst plot holes I have ever seen in a movie. The whole film revolves around a specific event that happens in the first few minutes of the film. Unfortunately, the actions taken immediately after the event, which determine the following actions throughout the film, are totally ridiculous given the circumstances.
It's not easy to do, but if you can put that one moment aside and just pretend that the obvious and easy solution doesn't exist, the rest of the movie is a lot of fun to watch. It's a solid thriller and even if you do figure it out, the reveal will leave your jaw on the floor.
Tagged in: 2020 Joey King Peter Sarsgaard The Lie Thriller
Continue reading
Hits: 218 0 Comments